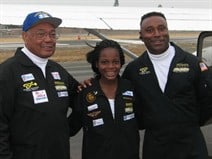 Youngest African-American Female To Fly Across The US.
Milwaukee, Wisconsin-July 8, 2009

Kimberly Anyadike (on-ya-DEE-kay), a fifteen year old girl from Compton, CA is flying across America as the youngest African American female to ever accomplish such a feat. She will be piloting a red-tailed Cessna 170 alongside Captain Ronell Normann who is serving as the safety pilot on behalf of Air Cargo. Capt. Normann volunteered his knowledge and expertise to assist Kimberly on getting to each destination swiftly and safely. Also on board is General Levi Thornhill, a decorated World War II veteran and member of the Tuskegee Airmen. The airplane, which happens to be named after Gen. Thornhill, will be making its way from Compton, CA on June 29th to Newport News, VA. They are currently en route to Detroit, Michigan and will be arriving in Milwaukee between 11AM and 1PM tomorrow.

The trip is intended to be a tribute to the Tuskegee Airmen who risked their lives for a country that was not willing to initially give them the credit they deserved. Robin Petgrave, owner of Tomorrow’s Aeronautical Museum, stresses the importance of history, heritage and legacy by educating children about the Tuskegee Airmen. Kimberly admits much of the trip is to honor the Airmen, but there are many more prevalent motivating factors here.

“When someone tells you that you don’t have the cognitive ability to do something, it makes it that much better to go out and say that you did it,” Says the fifteen year old Kimberly. Just last year her sister, Kelly, set a world record for flying four fixed wing planes in a single day. Kimberly hopes that accomplishments such as these will inspire young people to pursue their dreams to no avail. The trip has been made possible by Tomorrow’s Aeronautical Museum, which has a program set in place that provides scholarship and after-school programs for young at-risk youth. Kimberly has been a part of the Compton Airport-based program and has been flying since she was 12. Kimberly will visit with members of the East Coast chapter of TAM in hopes of inspiring and motivating her fellow students by showing if she can do it, they can too.

Air Cargo was gracious enough to donate a pilot, fuel, and lodging along the way at a number of stops in order to aid the group throughout the process. The trip will have several stops to allow other Tuskegee Airmen across the country to autograph the airplane so that their spirit will always fly with the students. We are delighted to announce that after the trip to DC, Kimberly Anyadike will be flying to Milwaukee on July 9th where she will be welcomed and celebrated by Air Cargo. Levi Thornhill will also be awarded a commemorative certificate for all of his accomplishments. When thinking of these accomplishments, it is stated best by Air Cargo’s very own Flight Operations Manager, Theodore Prince, “It is because of the sacrifices of men like Levi Thornhill that we have the opportunities today to participate fully as Americans. For me specifically, the opportunities that I have had, both in the Military and in Aviation are a direct result of the Tuskegee Airmen and the accomplishments of Levi Thornhill’s generation.”

Want to join the discussion?
Feel free to contribute!

We are hiring!
Mechanics
Apply Online